All the good stories have an interesting start, a journey, and hopefully a happy end.

The Cross Wrap story has not only an interesting start but also a happy one. The journey of 27 years until this point has been exciting, challenging, full of joy, success, and failures, but most importantly, full of great teamwork. The story so far is everything we could ever wish for and more than we could have ever imagined.

This story’s structure is different from the normal one because there is no end on sight, only a bright future with exciting and meaningful missions to come.

Welcome to read a glimpse of the Cross Wrap’s 27 years long story from our perspective. 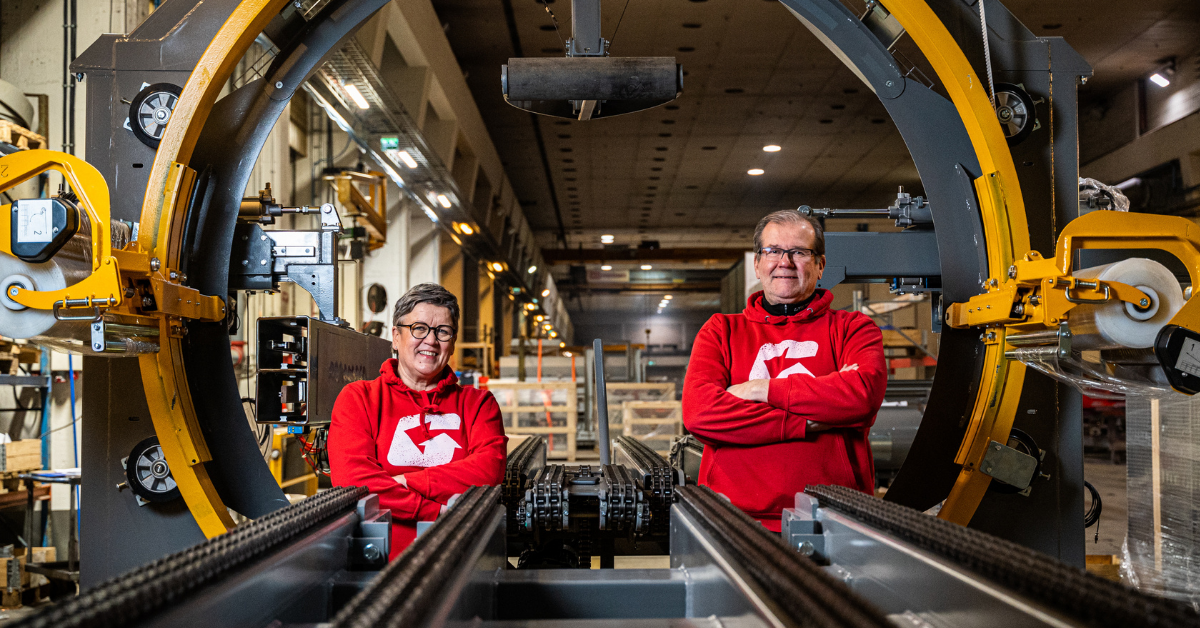 This whole text is written by Satu & Kalle Kivelä, In Tahkovuori, Finland, December 2021.

Some countries have had a special meaning in CW history. One of these countries is the UK.

It all started on a business trip at a farming show in the UK in 1992, where a young Finnish Sales Guy was presenting a bale wrapper for round silage bales.

This business trip was a low-budget trip. He was driving a Jeep pulling the demo wrapper all the way from Finland to the UK. The whole trip required multiple days of driving and two ferries, first from Finland to Sweden, and after driving through Sweden, a cargo ship trip from Sweden to the UK.

Eventually, the sales trip was not so successful, but it gave the young Sales Guy lots of thoughts.

On his way home, which included again multiple days of traveling on a cargo ship and driving thousands of kilometers, he got a great idea: I want to design and build a wrapper. A wrapper that can wrap square bales and not only bales but any rectangular items, because that was what the customers were asking.

At this point, some of you may already guess that the young Sales Guy in the story was 32 years old, Kalle Kivelä, who was in the early 1990s working as an independent sales rep for agricultural round bale wrappers.

A few weeks after Kalle arrived home from the UK in July 1992, big things were happening in Kivelä’s family. A baby girl named Martta was born, and with the two years older big brother Taneli, they created “quite a lively atmosphere” in the house. In the middle of the busy young family’s life, the first product ideas for an innovative way to wrap square bales and rectangular items were also born. These were the first steps towards a company to be soon founded and called Cross Wrap.

So surprisingly, the family suddenly had three “kids” instead of two, though they maybe did not know that back then.

Innovations based on customers’ needs have a significant role in Cross Wrap’s story.

Innovation of the Cross Wrap wrapping method was patented in 1993, and Cross Wrap was founded in 1994 by Kalle, Satu, and local venture capital company Savon Teknia (later, Canelco Capital). 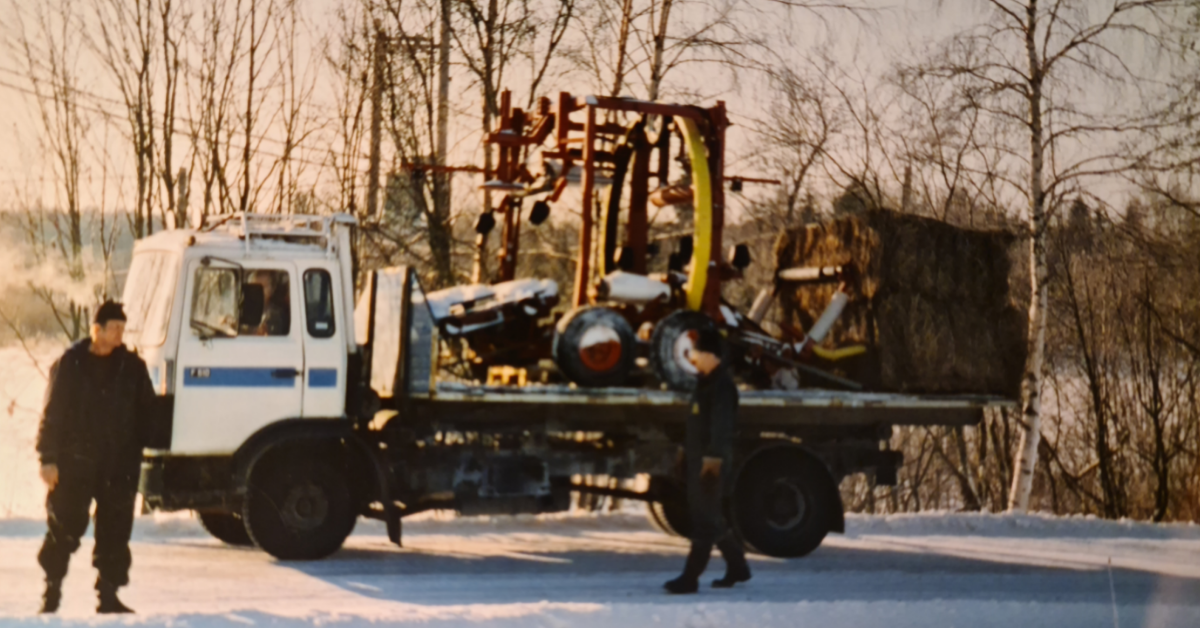 CW’s business plan from those early years was full of brave R&D, ambitious sales targets to several countries already from the start. Not only to Finland or its neighbor countries or Europe but also to countries like New Zealand. We were furious to meet those targets, and even in the early years, we sold and delivered the wrappers to the other side of the world. 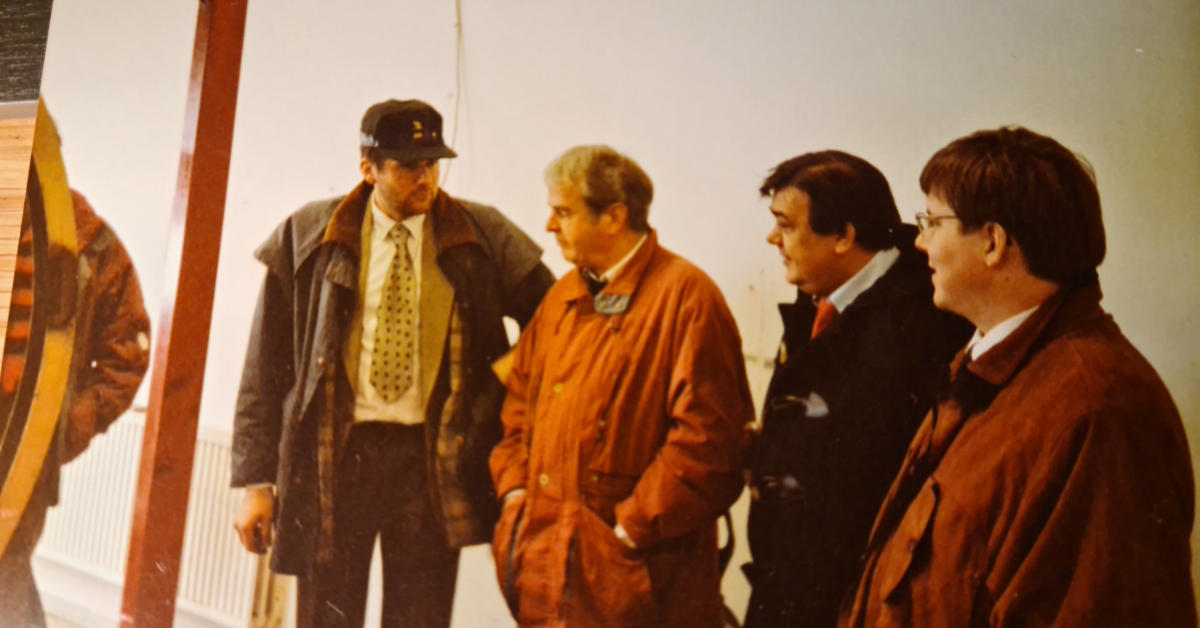 Some of the first customers visiting the manufacturing site in the early nineties. Kalle is in the picture on the left, wearing a stylish cap and tie combination as the young start-up entrepreneurs do even today.

Already in 1994, we wrote in our business plan that there would be a market in the future for utilizing waste-based materials to fuel. We said these materials in bales should be crosswrapped in the stretch film so materials could be transported and stored safely. Not many people believed in our business plan, but luckily, there were enough brave ones to trust our vision. 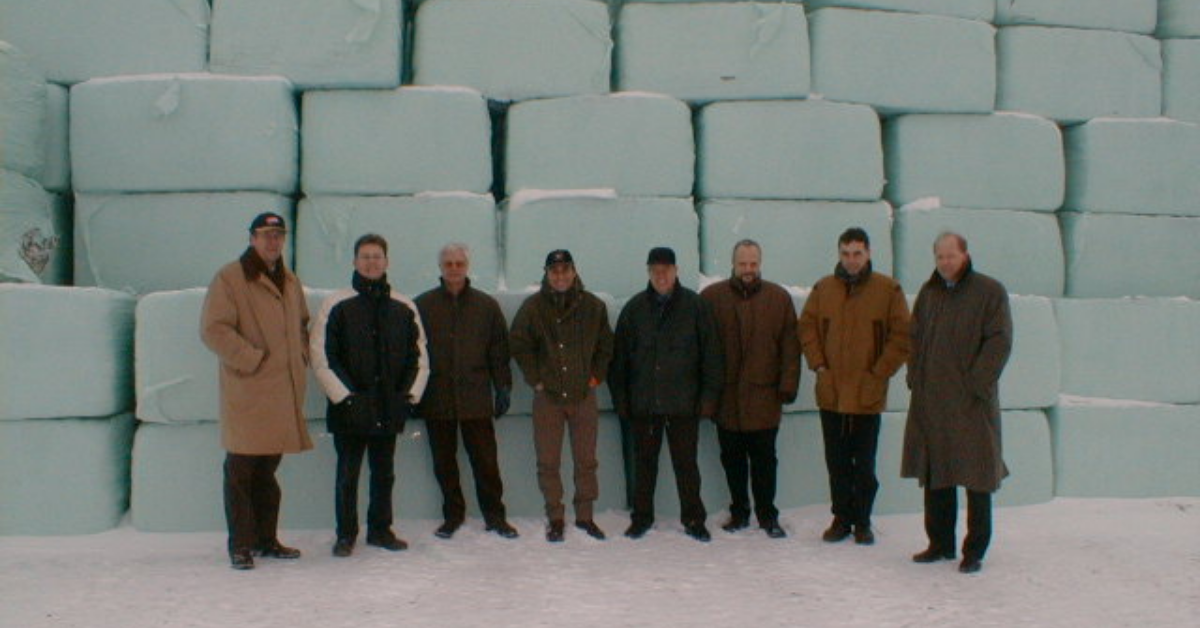 Later, during the next fifteen years, the innovations, R&D, and patents of the Direct Wrapper, Bale Opening, and Bale Dewiring Machine did follow. These innovations created the first steps not only to WtE but also to the recycling industry.

Back in the mid-1990s, there were not so many people believing in us, but here we are.

One of the first “believers” in CW Bale Wrapper was Mr. Andreas Stricker, who wanted a more efficient Bale Wrapper for the Buchs WtE plant in Switzerland. So, in 1996, we delivered him CW 2200 Bale Wrapper to replace a rotation wrapper in use. Buchs plant was an excellent reference for years.

As told earlier, not only Europe was our market. In 1997 the town of Beirut was drowning in waste in demanding conditions after the war. We had an opportunity to solve one of the problems – the waste problem by wrapping baled waste with CW2200 Bale Wrappers. 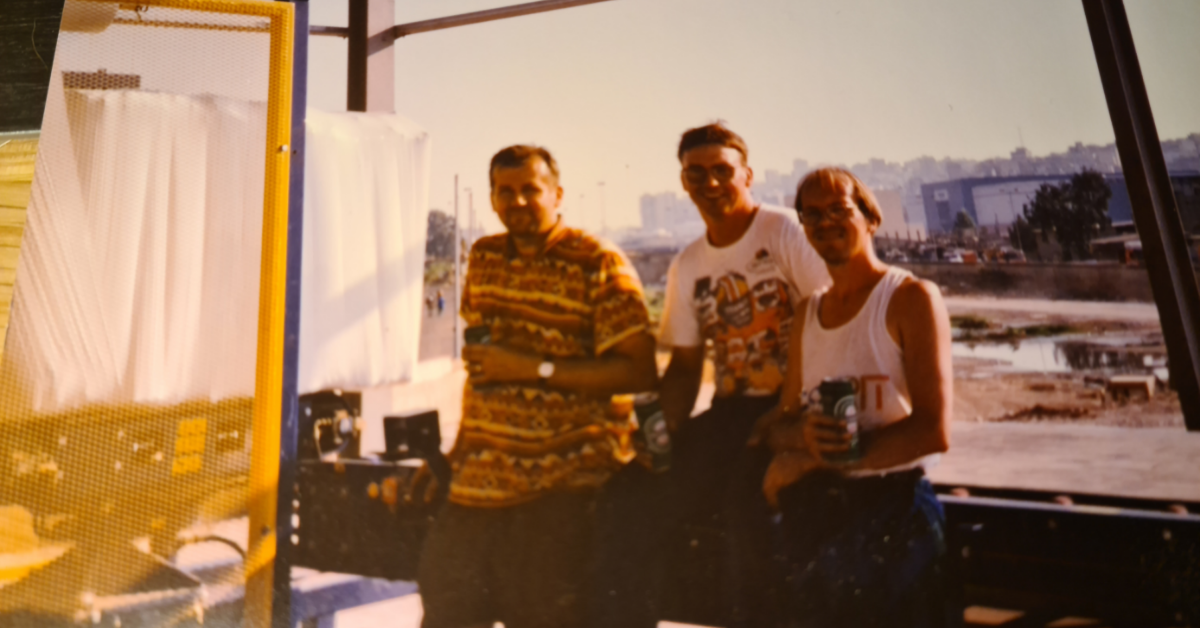 Afterwork in Beirut in, 1997. Kalle on the left, and Jukka Oksman on the right.

The dangerous and unforgettable installation and a few service trips to Beirut were made by Kalle, and our brave engineers Jukka Oksman and Markku Mönkkönen. By the way, Jukka is still today 2021 working as an Engineering Director of Cross Wrap, and the town of Beirut is still wrapping with CW Bale Wrappers; altogether, six wrappers were delivered during the years.

The first markets for CW2200 Bale Wrapper to grow were Italy and Spain followed by the UK – thank you for believing in us. To create growth, a young company needs partners and end customers who have the need and who are brave enough to buy innovative, advanced new solutions to solve problems.

For Cross Wrap, Italy and Spain started this development with wrappers and have continued it with CW Bale Openers and CW Bale Dewiring machines. Also, when the UK started the export of RDF and SRF in 2010, the market growth was rapid. For few following years, the UK turned to be the number one market in the volume of the CW Wrappers.

Being busy for the whole 1990s with the waste industry kept us away from the Board Industry until 2001. In the first year of the new Millennium, we found the first great and brave customer, suddenly not far away, only half an hour drive away from the CW headquarters.

Satu met Plant Manager Kimmo Wilska from Schauman (later UPM) at the local Chamber of Commerce. Only a day later, Kalle and his ideas were introduced to Kimmo, and the rest was history. The first CW Board Packaging Line was delivered to the Kuopio Schauman plant to pack LNG plywood stacks.

This outstanding reference was followed by the deliveries to UPM and Metsä Group in Finland, Sveza plants in Russia, Berneck in Brazil, Arauco in Chile, to name a few of Cross Wrap’s Board Packaging Line customers.

The jump to recycling industry – plastic and paper

Following the route of innovation, in 2017, Cross Wrap launched the CW Bale Dewiring for the plastic and paper recycling industries.

End customers and partners in all continents of the fast-growing recycling industry have responded to our supply. Today in 2021, CW Dewiring Machine is challenging the Bale Wrappers already in the volume of revenue.

There are so many companies and persons to mention from the recycling industry, who led us to find the right solutions and still lead us to develop more – we sincerely want to thank you all.

All 60 countries and over 600 machines – well done Cross Wrap

Additionally, to the countries and deliveries mentioned here by name, hundreds of CW machinery have been delivered worldwide. The most northern machine operates in the arctic island of Svalbard and the most southern in New Zealand. 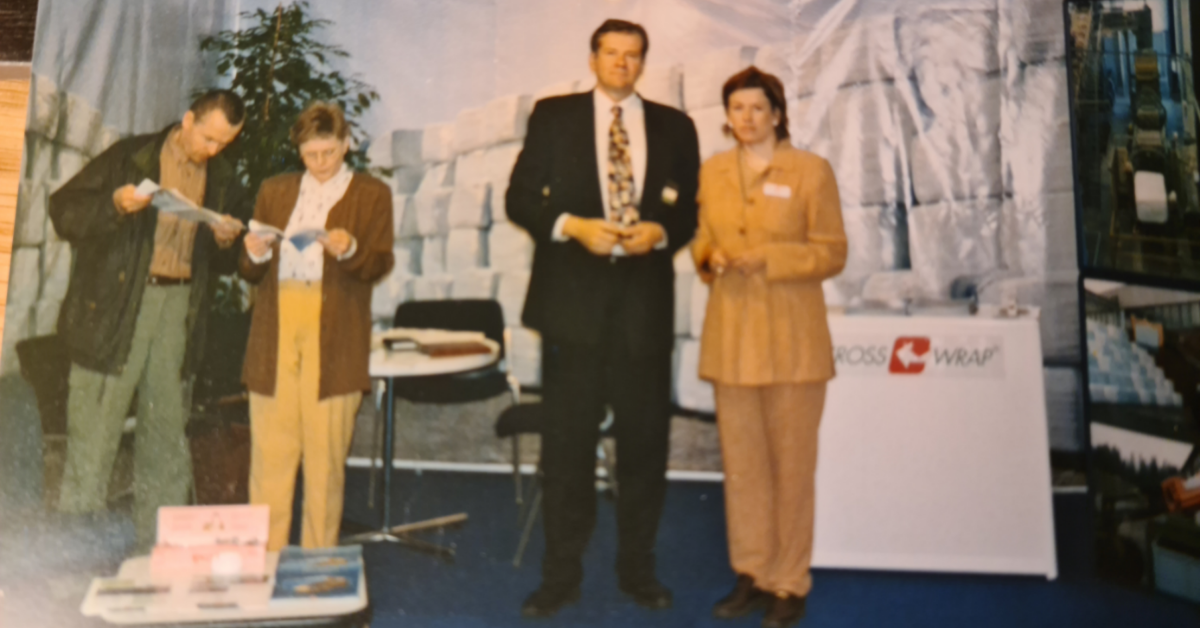 (Markku Mönkkönen, Ulla Pukarinen, Kalle and Satu Kivelä at the Cross Wrap expo stand in 1999. By the way, Ulla is still working in Cross Wrap today in 2021)

So, you may only imagine that we packed our bags a “few times” for sales trips to reach these numbers.

ONLY A PIT STOP, NOT THE END 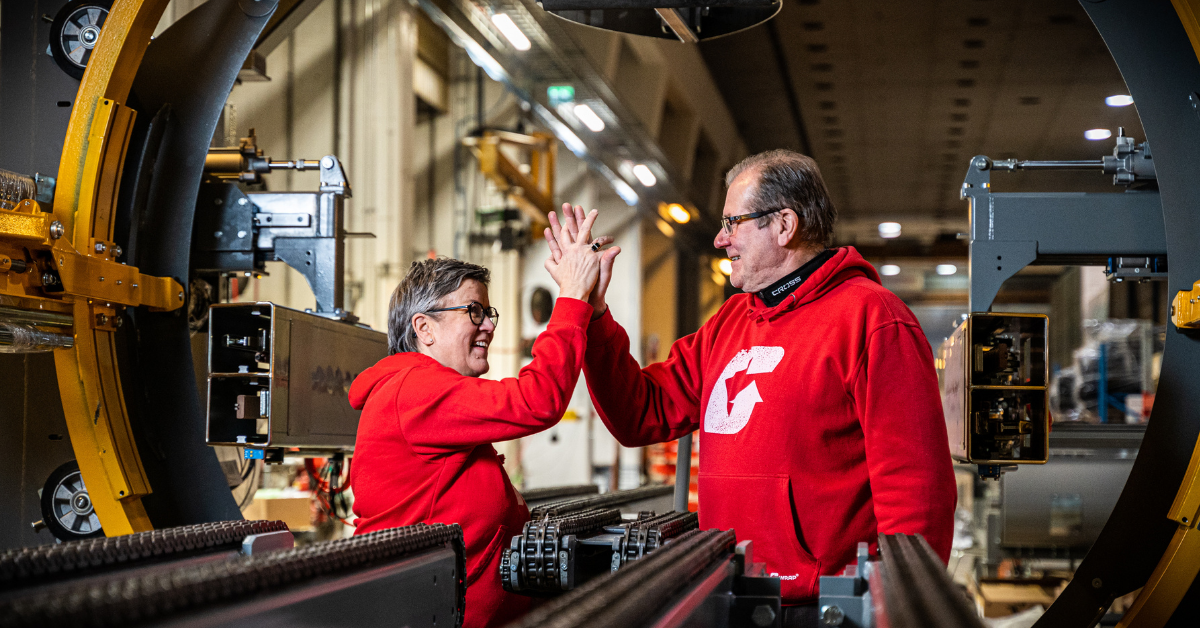 Though we just told a glimpse of the story of Cross Wrap so far – there is no end coming like usually in stories. For Cross Wrap, this is only a pit stop, where we two, Satu & Kalle, say our farewell to this great industry and great company. 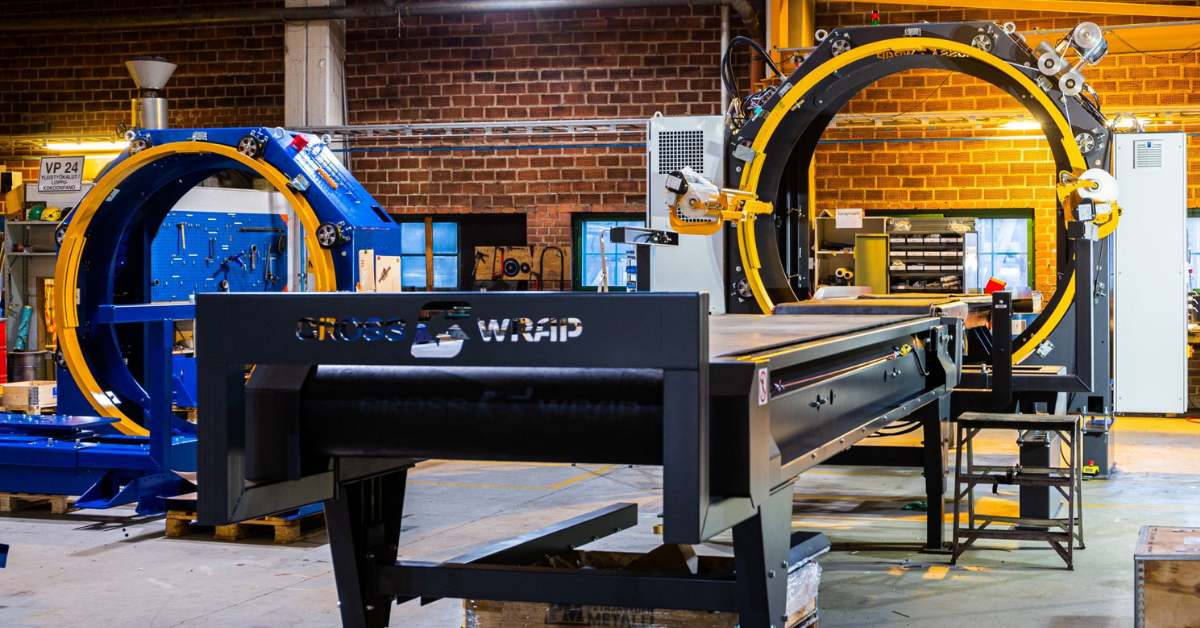 Cross Wrap will continue to grow and shine brighter than ever with the talented and devoted team and new management. The Cross Wrap team has always been the company’s most important asset, and we believe that they will be a competitive advantage also in the future. We want to thank each person who has worked or is now working with Cross Wrap. 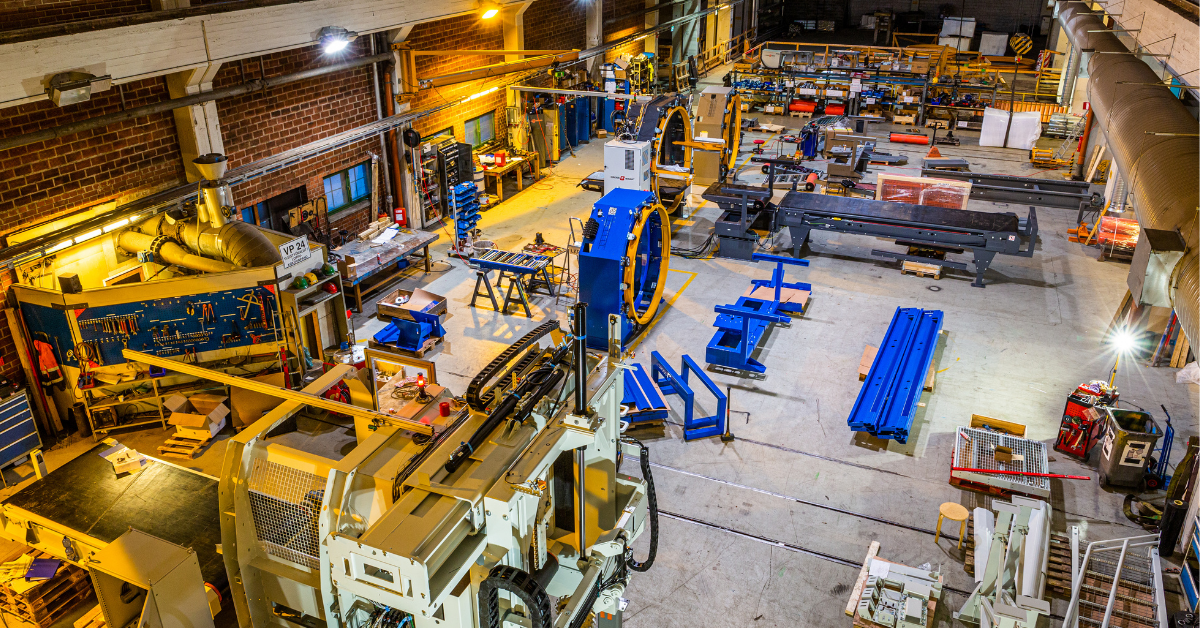 We also want to give credit to Savon Teknia VC’s manager Mr. Matti Lappalainen, who was one of the first ones to believe in Cross Wrap. Later, the same VC with a new name and manager, Canelco Capital and Mr. Pekka Hietala, worked with us as a true owner, supporting us in the challenging times and good times.

Without our customers, Cross Wrap would not exist. We thank all of you around the world. There are so many persons and companies that it is impossible to name you all, but all of you have your importance in Cross Wrap’s story.

Finally, we want to give a special thanks to our children Martta and Taneli, who may be the only ones to know how much this “third child” really did take time and effort during these 27 years in our family’s life. Hopefully, our work showed them the world of the family company – the good and fun times, the challenges and success, but especially the meaning of teamwork. 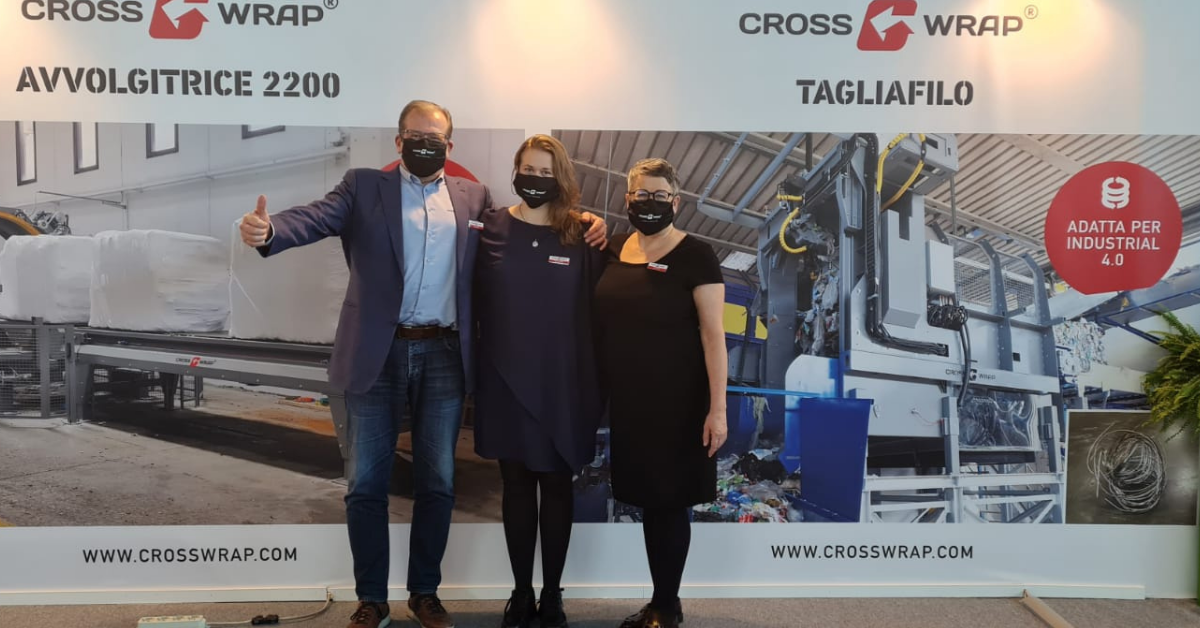 For us, it has been incredibly inspiring to work with Martta and Taneli the past couple of years together for Cross Wrap. Martta as the Sales Manager of Italy and North America, and Taneli as a Strategist working through his company Chindicom, building up digital marketing and marketing strategy for Cross Wrap.

Cross Wrap has been a significant part of our family’s life. Cross Wrap’s Sales Manager, our daughter, Martta Kivelä, described the role of Cross Wrap in the best possible way when saying that “Our parents Satu and Kalle, have three kids: One son, one daughter, and one company.”

That said, now our third kid called Cross Wrap has grown to the age that it is ready to continue its path towards future success stories on its own.

Thank you and farewell,

PS. If someone is wondering what we do next, here comes the answer. 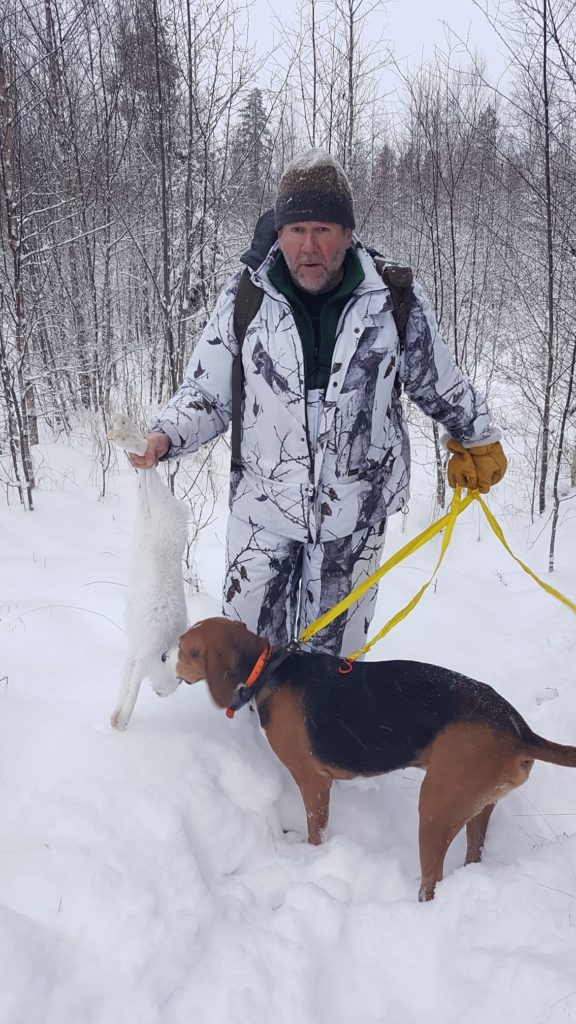 Kalle: “You will find me from the mountains skiing, from the Finnish forest hunting, or doing forestry work and planting new trees.” 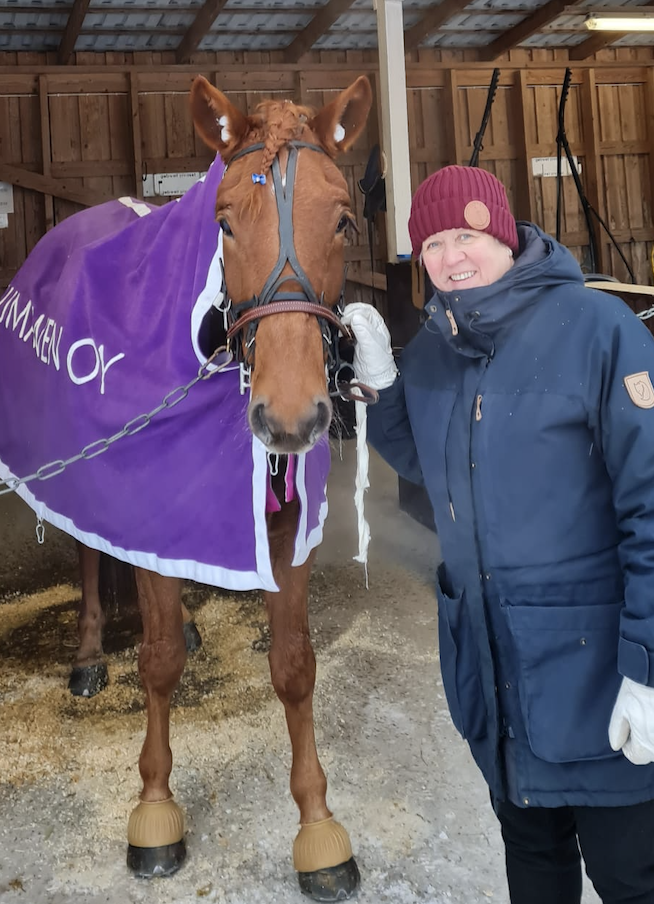 Satu: “I have a new project already ongoing. In the future, you will find me at the horse races around Finland following the competitions where my own horses are racing.”